Steven Spielberg’s latest movie “The Post” tells the story of how Richard Nixon tried to stop the New York Times and the Washington Post from telling the American people their leaders doubted the outcome of the Vietnam War from its beginnings.

Until I watched Steven Spielberg’s latest movie “The Post” last evening, I had never thought of the throughline that newspapers have had in my life.

When I was growing up, Daddy supplemented our income by working Saturday nights–through the night until the compilation work was done–at the Knoxville News-Sentinel putting ad circulars into the rest of the paper by hand.

Being a sports maniac, Daddy thrilled at seeing the Sunday sports page–with all the notable sportswriters of the time–on Saturday night before the papers were delivered on Sunday.

When he was just out of high school, my son Justin started working at the News-Sentinel in distribution and worked there for 13 years–even after he began going to college.

He was a union representative during a difficult time at the paper when he and his fellow distribution employees worked without a contract. Such was the way of unions in the South: not as numerous or as powerful as those found in the North.

Lisa, a dear friend I grew up with, worked for the local Knoxville paper as a reporter. I envied her job because she wrote for a newspaper. The real deal. Putting words on paper, telling stories that were conveyed into people’s homes, changing opinions and lives.

Snow on the University of Tennessee campus in 1934.

After a few years at the paper, my friend switched jobs to work for the University of Tennessee’s liaison with papers across the state and nation, its Information Services office. I suppose working for a paper was not a good living wage for a woman starting out in the 1980s in Knoxville. And I’m quite sure it is the same now that the News Sentinel no longer has a hyphen in its name and is no longer a truly local paper either. It was subsumed a few years ago into the Gannett/USAToday corporate amalgam of papers that use USAToday stories and add in some local flavor, sports, and obituaries. The rates go up, and the papers get slimmer, and the Knoxville news too often doesn’t get told.

Knoxville lost its main alternative weekly newspaper twice. The highly popular Metro Pulse was purchased by the News-Sentinel organization, then canceled after a few years when Gannett bought the Sentinel. The subsequent upstart Knoxville Mercury newspaper, with editors and contributing writers from the Pulse, lasted a few years before it too bit the dust in a town that really could use some truly local reporting. My nephew’s amazing girl friend Paige wrote for the Metro Pulse, and my dear friend Stacey worked for the Mercury. I was devastated at the loss of both papers. 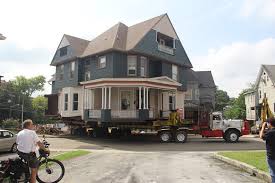 When you move in the Fort Sanders area of Knoxville, you can actually get carried away.
Photo: Knoxville Mercury

Without a local, independent paper, Knoxville is a small-town city without a voice. The stories covered by the Metro Pulse and then the Knoxville Mercury were the investigative stories that needed to be told to an audience that was eager to read it.

When our house in South Knoxville–that we had tried to sell for two years–needed to reach the attention of folks who might be interested in buying it, our real estate agent placed an ad in the Metro Pulse and sold our house in three weeks. Putting an ad in the News Sentinel would not have the same effect now–nor would it have 15 years ago.

As I watched “The Post” and saw its depiction of the craftsmen working with blocks of type to ink the paper, and the long line of newspapers flowing high above the pressroom, it reminded me of what my Daddy used to say about loving to see the presses run. The thrill of watching blocks of type, combine with ink and paper, get folded in half, and sent out “hot off the presses” containing the hopes and dreams and stories of the people of our city.

A 1956 bride photographed with her father–my mother and my grandfather.

And what stories: who died, who won the football game on Saturday, who was getting married, who had gotten a scholarship, the scandal when one of Tennessee’s governor went down in shame, the glory of all the University of Tennessee’s Lady Vol national championships. It was in the paper and we shared a community of information that is for the most part gone.

Sure the News Sentinel still has a sports page with local writers, that’s one of the few sections of the paper that actually still has a stable of writers. Because sports is, after all, what this town is really interested in. But we used to have more than that. Of course, the News Sentinel was never a muckraking paper and did not win many national awards. But it was our paper. And told our story.

Many people do not care about the downturn in the fortunes of daily newspapers because, well there is, after all, the Internet and broadcast television news. But thank heaven for the few papers who pay reporters to write the stories that hold the rich and powerful accountable because that is what is critical to the health of a democracy.

Even though we don’t really have a democracy, since twice in the past 20 years the choice of the majority of voters did not become President of our country. But at least we ascribe to democratic values, we defend democratic values at home and abroad, and we tell ourselves that we act on democratic principles–that the will of the people means something in this country.

In order for the will of the people to mean something, however, a free and independent press must hold the government (at all levels), corporations, businesses, banks, the rich, our politicians, and our leaders accountable. Because that is what our nation was based on, and that is what keeps us free in any real sense.

So, yes, I would have been proud to have worked for a newspaper and been one of those few women who rarely made it to the table where decisions were made, but were at least on the team of a real newspaper. I would have been honored to tell the stories of people from all walks of life.

Author Dorothy Allison’s autobiography Bastard Out of South Carolina was one of the books I read that really spoke to me as a writer, and as a child who grew up poor. I was lucky enough to meet her when she came to the University of Tennessee to talk to would-be writers in the university’s English department. She told us, “Tell your stories. That’s your gold. We want to hear your stories.”

I suppose this blog is my attempt to continue telling my story. And my Daddy’s. Although he is gone, he is with me as long as I live–and for me he is still smiling at the wonder of it all: those papers on their conveyor belts, speeding on their way to all those homes where people will read them and together they will weave their common language of community and hope.