Posted on December 1, 2017 by aamontgomery 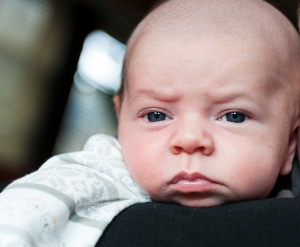 I have a dark-eyed, adorable obsession: the Little Man who a month ago was born into our lives. Last year my son Justin married the love of his life Tracy. From their love, has come their son Lincoln, the already dignified and compelling presence we call Little Man because he is already so much his own person! And he was born with such large hands that he is still growing into them.

When I was a child, I used to swing on my grandparents’ backyard swing set and make up songs. I can’t remember a time that music has not played in my head when I am not dealing with all that life stuff that keeps me running about. So over the past few weeks I have made a lullaby for Little Man to the tune of the song Little Bird, Little Bird, written by Mitch Leigh in 1972 for the Broadway musical Man of La Mancha. So here we go . . .

Open up your arms
To the big wide world
Who’s more lucky
Than us! 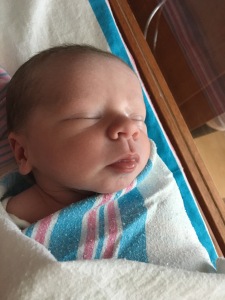 Lincoln on the day of his birth.

The unadulterated force of my love for Lincoln and joy at his birth has been in sharp contrast to rest of the past year. Since I lost my dear father a year ago, and we gained an untenable leader for our country, I have been despondent about the present and the future.

I was born in the United States–in Tennessee, a historically poverty-stricken state, I’ll grant you–at a time when the country was riding high. When I was old enough to be aware of the world around me, America was about 25 years past saving the world from Nazism; World War II veterans were in their prime and led local, state, and national organizations; and we were proud of our place in the world.

Give me your tired, your poor,
Your huddled masses yearning to breathe free,
The wretched refuse of your teeming shore.
Send these, the homeless, tempest-tost to me,
I lift my lamp beside the golden door! 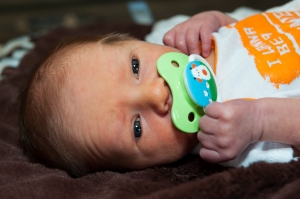 Little Man, a few weeks old, with his big hands.

Until today when I looked up the exact wording of this song, I did not realize the lyrics of this song were written in 1883 by Emma Lazarus, a New York poet who was the daughter of Jewish immigrants. She wrote it to help raise money to properly exhibit the Statue of Liberty which was given to our country by France. This statue, formally called The Statue of Liberty Enlightening the World, was given by the French people out of friendship and to mark our countries’ shared commitment to democratic ideals.

When we received this extravagant gift, many Americans were less than thrilled about a monumental statue of a woman holding a torch which required an expensive pedestal in order to display it. Fundraising efforts were not going very well, so its leader asked Emma Lazarus, a 34-year-old New York poet, to write a poem to be auctioned–along with works by other popular artists of the time, such as Mark Twain and Walt Whitman–to secure enough money to exhibit Lady Liberty in a fitting manner.

Although she was reluctant to write a poem on demand, Lazarus contributed a sonnet to the effort. As for Mark Twain, he refused to contribute any of his work. Instead he sent a check with a letter enclosed proposing that a statue of the Biblical Adam would be more fitting and wrote:

What do we care for a statue of liberty when we’ve got the thing itself in its wildest sublimity? What you want of a monument is to keep you in mind of something you haven’t got—something you’ve lost. Very well; we haven’t lost liberty; we’ve lost Adam.

Another thing: What has liberty done for us? Nothing in particular that I know of. What have we done for her? Everything. We’ve given her a home, and a good home, too. . .

But suppose your statue represented her old, bent, clothed in rags, downcast, shame-faced, with the insults and humiliation of 6,000 years, imploring a crust and an hour’s rest for God’s sake at our back door?—come, now you’re shouting! That’s the aspect of her which we need to be reminded of, lest we forget it.

When I read Twain’s objections to the Statue of Liberty, it was not clear to me what aspect of Adam, the Biblical first man, Twain believed Americans had forgotten and needed to remember. According to Genesis, Adam and Eve lost their freedom to decide their own fate by disobeying God and were cast from their home, the Garden of Eden.

Perhaps Twain meant that a statue of Adam would be an apt reminder that we should safeguard our freedoms better than the first man reputed to have lost his. Although Lady Liberty has been a very effective inspiration to the world fpr the past century and a half, Twain’s admonition could be more relevant to our present-day situation than his own.

In any event, Twains’ alternative suggestion went unheeded, and Emma Lazarus’s sonnet, The New Colossus, was read at the Statue of Liberty’s 1883 exhibition.

Not like the brazen giant of Greek fame,
With conquering limbs astride from land to land;
Here at our sea-washed, sunset gates shall stand
A mighty woman with a torch, whose flame
Is the imprisoned lightning, and her name
MOTHER OF EXILES. From her beacon-hand
Glows world-wide welcome; her mild eyes command
The air-bridged harbor that twin cities frame.

‘Keep, ancient lands, your storied pomp!’ cries she
With silent lips. ‘Give me your tired, your poor,
Your huddled masses yearning to breathe free,
The wretched refuse of your teeming shore.
Send these, the homeless, tempest-tost to me,
I lift my lamp beside the golden door!’ 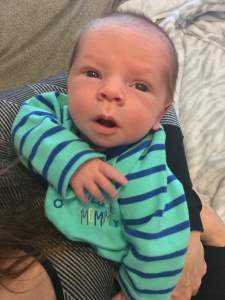 The love of our lives.

Lady Liberty has welcomed millions of refugees to America which has been a sanctuary from oppression, a land of opportunity and second chances. Her welcome presence in the New York harbor has been a symbol to hope to  immigrants seeking a better life.

Like Lady Liberty, my grandson’s birth awakened a hope in me that I thought was gone. When I look into his eyes, I want to ensure he has a world where he can breathe freely, love who he wants, do what he wants, and realize his dreams. Despite the daily evidence to the contrary, Lincoln’s existence gives me hope.

Loving Little Man as I do makes me want to fight for his best future. It is no coincidence that a female figure was chosen to exemplify the ideals of democracy and freedom, even if females have not always been able to exercise those rights in this country. Now that women have the right to vote, we should use that right from an impulse of love, not an impulse borne from (and born out of) fear and hate. More than with our vote, we should also use our individual talents as well as our combined efforts to conserve and protect our environment; provide affordable health insurance for all, but especially for children; promote policies that favor the majority of people, not policies that favor only the wealthy and powerful; and support regulation and legislation to make education at every level more child-friendly and affordable without graduate-school education benefits being taxed as compensation.

I am not a glassy-eyed Pollyanna, but a realist who knows the odds are stacked heavily against us. But we must do what we can. Twice in the past two decades, our country has demonstrated that Americans do not, by definition, live in a democracy where the power of the people and the rule of the majority decide their leader. We can argue about many things, but the present rule by the minority over the will of the majority is our present-day reality. However, I am encouraged by the fact that America and her allies overcame the Nazis in World War II and put an end to the systematic death machine of the Holocaust. If we could overcome the seemingly unbeatable German juggernaut, perhaps we have a future beyond the chaos of our current governance. 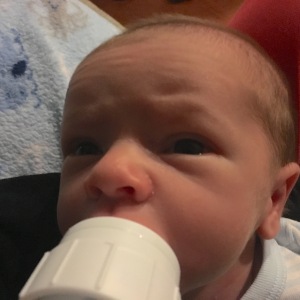 May he have the chance for a bright future.

A few years after Emma Lazarus wrote her poem to help raise money for the Statue of Liberty, she died of cancer at the age of 38. Her obituary did not mention her contribution to the way the world viewed our country: as a symbol of hope and liberty. Although it wasn’t till 1903 that her poem was championed and her words were added to the Statue of Liberty, her work has inspired generations to emigrate to theis country that my grandson’s namesake, Abraham Lincoln, said was “conceived in liberty and dedicated to the proposition that all men are created equal”.

Sometimes the best efforts can seem lost for years, but then they may unexpectedly resurface above the waves, and find safe harbor. May it be so–sooner rather than later–for the precious sweetheart we call Little Man, and all the other little women and men we hope will have a future in this world.