They Are Your Home

My husband and I were watching the fabulous TV show Longmire that is produced by, and appears on, the Arts & Entertainment Channel (A&E). Suffice it to say the show is about a throw-back man, a sheriff in Wyoming, who cares about doing things in a person-to-person way and making a difference in the lives of the broken people who cross his path. His world is gritty, realistic, and painful, but somehow spiritual. 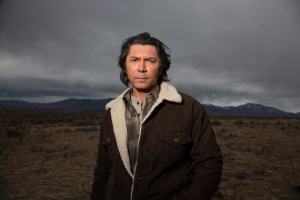 Longmire’s best friend is a Native American named Henry who owns a bar in the show’s fictitious Absaroka County.

On last week’s show, Henry visited an ancient Native American woman who  appeared to be a healer as well as a spiritual leader of her tribe.

Henry asked her a question, and, as is often the case with wise people, she answered his question with a question saying, “What did the First Warrior say to the Great Spirit?” The following was his answer.

The First Warrior looked out on the land that was his home
He saw the hills and the stars
And he was happy.

For giving him this home,
The First Warrior told the Great Spirit
That he would fight and win many battles
In his honor.

2 Responses to They Are Your Home