Blooming Out of Season

Nearly a decade ago I planted two camellias in container pots just outside the front door of our home. I never thought they would live for long–in containers, mind you– in the mercurial climate of East Tennessee. But my sister, Lisa Stanley of Stanley’s Greenhouse, who is an expert on plants that will grow in the Tennessee Valley near our Great Smoky Mountains, assured me the camellias would grow and “bloom in January when nothing else is in bloom”. 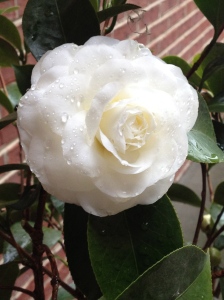 Well, my sister was right. Besides my winter-hardy violas, nothing else seemed alive when the camellias bloomed with drops of rain on their faces.

January is the hardest time of the year for me–and many of my friends. Bleak, dark, nothing much going on, depressing. And then the miracle–for that is what it seems like every year–of white camellias with their winter-rose-like blooms.

I assumed camellias were tropical flowers that could only be seen in equatorial climes–like the gardenias over the ear of Billie Holiday in that classic photo of the peerless Lady Day, the most unique and finest jazz singer of them all. The way she phrased a song, ever-changing and ever new, was second to none–except perhaps the sublime Nat King Cole, who made every note a revelation. 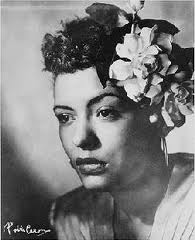 I read Billie’s biography which, even though it was written with her participation, has been dismissed as having little relationship to the realities of her too-short life. No matter the exact details, Billie undoubtedly lived her songs, you can see it in her eyes, you can hear it in her unmistakable voice.

According to Holiday’s friend and fellow jazz singer Carmen McRae, Billie’s signature look of wearing gardenias in her hair came about by accident. While curling her hair before a performance, Billie badly burned a section of hair and McRae ran out to find something to cover the injury. Voila, she found some a sprig of gardenias and a classic look was born.

Holiday bloomed in a time when even the most famous and talented black musicians were not welcome in restaurants, hotels, public restrooms, or the parts of town frequented by white folks. Unfathomable. 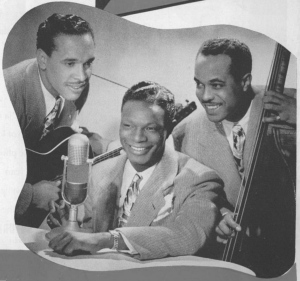 Recently I watched the riveting documentary Nat King Cole: Afraid of the Dark  on Netflix. Director Jon Brewer interviewed Cole’s second wife Maria Ellington Cole and had access to Cole’s journals and family video footage that has never been made public before.

Just like Billie Holiday, Cole was a singular, once in a lifetime talent. whose  life was cut short. Beside his trailblazing television show and acting in Hollywood movies, Cole performed across the country and in the glitziest Las Vegas hotels and showrooms to mostly white audiences. The documentary recounts that Cole was the headliner on Vegas marquees, yet he was not welcome to stay at the hotels where he performed.  He was forced to travel outside the city to hotels where “colored” people stayed. Nat’s friend and fellow crooner Frank Sinatra was furious about these “just-the-way-we-do-things” Jim Crow rules that were enforced not only in the South, but were widespread in many areas throughout the country.

Sinatra let it be known that if Nat Cole was not welcome to perform and stay in these Las Vegas hotels, then neither would he perform or stay there. The Vegas hotels did not want to risk losing Sinatra, so they changed their policies. I have never understood such racism that was rampant in the early and mid 20th Century and continues in too many ways to this day.

Curiously to my mind, some of the most wonderful, lively, amazing music was created in the 1930s and ’40s. When the Great Depression slapped people down and World War II brought unspeakable misery and oppression to most of the world. The millions who died quickly in battle were perhaps the lucky ones, certainly luckier than the poor souls in concentration camps: the Jews, Poles, academics, homosexuals, and anyone who tried to help them or attempted to fight Fascism.

In my experience, the best art seems to flourish in hard times. And people who have known hard times carry it always somewhere inside. People who have truly lived the bleakness of winter of the soul, can bring it forth when they sing or write about love, heartache, farming a few acres and a third goes to the bank, or the deaths of tiny children or women in childbirth. But the art from the hard times lives on and breathes. 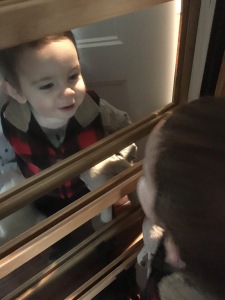 My adorable grandson Lincoln discovers himself in a mirror: Here’s looking at you, kid!

For me, it’s hard to get through January, February, March, and (what they say is the cruelest month, perhaps because it raises your expectations, then dashes them) April, so I reprint here 10 Things Science Says Will Make You Happy, from the Winter 2009 Yes! magazine. 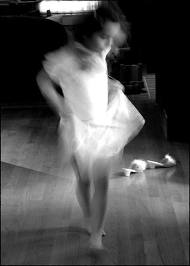 I would add that we should dance and play because there is far too little of that!

Yes, I know what you are thinking. We are caught in a polar vortex of Trumpian proportions. Our government doesn’t work; our planet is in jeopardy. I am no Pollyanna–although I did read the book when I was a girl. Not everything works out. Life is hard. People in power and people in everyday lives can be cruel, difficult, and impossible to understand or navigate. But I find meaning and happiness living with an open heart to the people I meet and the people I care about–with gratitude for the good and beautiful things and the small, wonderful things. I try in every way possible to make a difference in the lives of others. To make things better. It is the bane of my existence to chase the illusive better.

This way of living gives my life meaning and helps me to, as John Irving so eloquently put in in his 1981 novel The Hotel New Hampshire (as well as the movie that followed three years after), “keep passing those open windows”.

My aspiration is to be gracious as Lord Tennyson writes in the final lines of his poem The Lady of Shalott and as the incredible musician and Celtic-song-goddess Loreena McKennitt sings in her song of the same name: 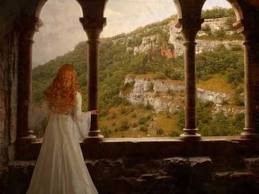 But Lancelot mused a little space
He said, “She has a lovely face;
God in his mercy lend her grace,
The Lady of Shalott.”

I ask for Grace in the New Year–and all the years thereafter. And aspire always to bloom out of season.

[This blogpost was originally posted on January 16, 2013. Today I rewrote and added my thoughts in the light of our current situation in 2019. It is amazing how six years have changed our country and the world so much–and yet so little.]

4 Responses to Blooming Out of Season