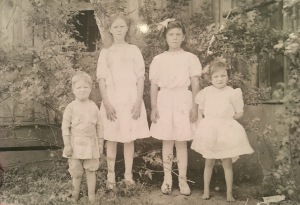 Since at least 1992, I have been searching for my grandmother, Darcus Montgomery. She gave birth to my father in April 1935, and only four months later–in early August–she died. Naturally I assumed Daddy’s mother died from childbirth complications, and perhaps in a particular sense that was the case, but the more I have learned about my dear grandmother, I found that her death was not as clearcut as I had imagined. 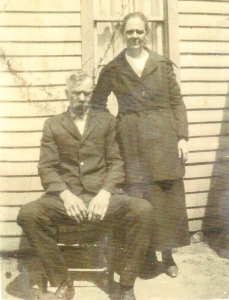 I probably would not have discovered much about my grandmother, who was born in Carroll County, Virginia, in 1903, if her mother, Cordelia, had not heard the call of Mormon missionaries and converted three years before Darcus’s birth. It so happens that Mormons, who prefer to be called Latter-Day Saints, revere family ancestry. Through their online ancestry esources, I found my grandmother’s death certificate and my husband was able to contact two of my cousins who now live in Utah.

My grandmother’s death certificate said she died of insanity from Pellagra psychosis. I had never heard of pellagra psychosis, but it is a severe nutritional deficiency that plagued many American Southerners in the wake of the Civil War. Apparently their diet relied too heavily on corn that had not been enriched with lime as the Native Americans had done to fortify it with niacin. According to Wikipedia, 100,000 Southerners suffered with pellagra in 1916, which was characterized by the four D’s: diarrhea, dermatitis, dementia, and death. 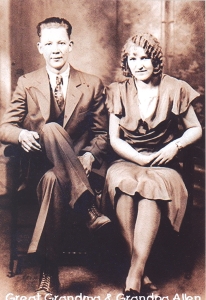 The photo we mistakenly thought was Daddy’s parents, Hodge and Darcus. It actually is a photo of my grandfather Hodge with his second wife Eulenia Brown, presumably on their wedding day, probably in the mid-1940s.

The death certificate notes that my grandmother died in the George Maloney Home. After research in the East Tennessee Historical Center, we discovered the Maloney Home was Knoxville’s version of the poor house where the souls consigned there worked in the fields under conditions so notorious that the state of Tennessee closed the place in the early 1950s. What my grandmother was doing in the poor house while her husband lived on Jones Street in South Knoxville, as stated on her death certificate, is a mystery we have not been able to solve.

Daddy had never seen a photo of his mother. However when he 80 years old, he and Mama visited a relative from Daddy’s father’s family and Mama noticed a photo of Daddy’s father, Hodge, with a woman they assumed was my grandmother.

Only last week did I learn the woman pictured with Hodge was actually his second wife Eulenia, and not my grandmother. My dear cousin Linda, whose father Stephen was Darcus’s younger brother, gave me the original photo of my grandparents which appears to be on their wedding day in 1934. 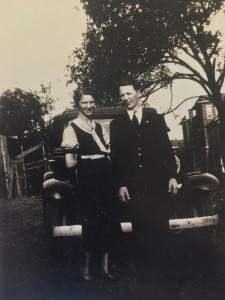 Finally the original photo of my dear grandmother, Darcus Montgomery, with my grandfather Hodge Allen, on their wedding day in 1934.

Even though my dear grandmother would be dead just a year and a half after her wedding and I never met her, I feel my life is whole now that I actually see her and know where I came from. I never felt that I exactly fit in my mother’s family. Although I loved them dearly, I felt as if I was a tiny alien. I loved to read and no one in my mother’s family read books. Daddy’s father, Hodge, was actually illiterate. It was a homecoming of sorts to learn that my great-grandmother Cordelia (Darcus’s mother) was an avid reader and named her children for characters in the novels she read.

Finding my grandmother, after all these years of searching for her, has made me feel at peace with myself in a way I have not known before.

Seeing Darcus’s dear face, and learning more about her from her family, has helped me understand there is a reason I am my own quirky, sensitive self–I am following in the footsteps of my dear, singular, beloved grandmother. 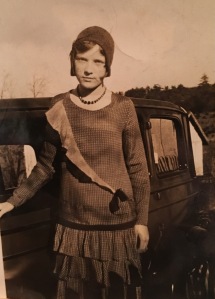 If she had not risked getting pregnant with Daddy– despite her sensitive physical and mental nature–my father, my sister, and I (along with our children and their children) would never have been born. Because she lived–even for just 31 years–she gave us life. As the amazing inspirational Fred Rogers of Public Television’s Mr. Roger’s Neighborhood said:

Who we are in the present includes who we were in the past.

Thanks to Darcus’s family, I now have seen her lovely face and I am home.