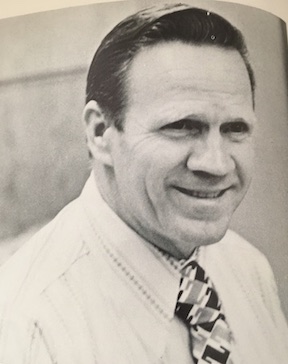 Fred Ridinger Jr., who served under Patton, taught Tennessee history at South High, and had some amazing stories to tell.

When I graduated from South (Knoxville) High School, I wanted to be a history teacher in the mold of my two favorite history teachers from South. My Tennessee history teacher Mr. (Fred) Ridinger Jr. served under General George Patton in World War II, but led his classes with humble good-humored example.

Mr. (Charles) Baum taught American history by telling us the stories of history and weaving them into the present. He also had devised his own version of the Risk, take-over-the-world board game and had us play against one another with the resources each country had during the Second World War.

Although participation in World War II had been over for 30 years when I graduated from school, the war’s values of serving your country and your community were still very much alive in our high school. But they were waning in the wake of the Vietnam War that ended two years before I graduated. We graduates of 1975 were something of a lost generation: a bit too young to understand the chaos and confusion of the Vietnam Era, but raised with the values of the generation that fought a world war and won. For a brief, shining moment, the American heroes, the G.I. Joes had made the world safe for democratic ideals over the Nazi machine that had ground Europe and Africa under its jackboot.

Mr. Baum taught that things were not so simple, explaining the oil crisis of 1973 in terms we could understand, if we were listening. I not only heard Mr. Baum, I wanted to learn everything I could, know for myself, and draw my own conclusions. I never wanted to be referred to as “Miss” Anna Allen, the salutation seemed so dismissive. Nor did I want to be among the women who subsumed their identities by using their husband’s names (Mrs. Joe Schmo) and gossiping and complaining in the kitchen while the men talked about weightier subjects in the living room.

Since my family had no money for higher education–my family’s income was $7000 or so in 1975–I  knew I needed to earn scholarships to attend. I was offered a full scholarship at Berea College in Kentucky, where poor kids such as me could get a free education while working at the college. What derailed that idea was a breakup by my long-distance Kentucky boy friend, and winning a one-year PTSA scholarship for writing a winning essay explaining why I wanted to be a history teacher. UT also awarded me a Fred M. Roddy Scholarship because I had a strong grade point average (7th in my class) and financial need. I also had a Basic Education Opportunity Grant (BEOG) given to disadvantaged kids who showed academic promise.

Despite all my shiny-faced accomplishments, no one in my family had ever been to college, so I was a lost cause when I entered the University of Tennessee (UT) in the Summer of 1975. I hoped to get my feet wet at college before the fall quarter onslaught. It didn’t help me because I was still quite clueless through all the registering hoops of university bureaucracy. I lasted in the College of Education for two quarters or so before switching to the College of Communications. Apparently there was a glut of teachers at the time, and we were told that if we were graduated in education, we would not be able to get a job. And, as I well knew, I really need a job when I graduated.

I earned good grades in college, but after a year of being impossibly poor and lonely as a commuting student who had no opportunity to make friends, I dropped out of school. A few months later I took a job at a financial services company, and promptly met the sociopath that would become my first husband. Despite my academic success, I was raised on movie romances and novels where things worked out for good girls if you tried  hard enough and did your best. Our church youth group studied the virtues of The Total Woman handbook: if we were very good, submissive Christian wives our husbands would love us and treat us with respect and all would be well in our world.

Let’s fast forward through the emotionally abusive marriage, raising an adorable boy as a single parent while working full time at the University of Tennessee as a secretary while going to UT part-time to earn my degree (thank heaven for free tuition for two classes a quarter for employees). Ditto, fast forwarding through another failed marriage and raising two adorable sons as a single parent and working full-time.

My sweet Mamaw and adorable son Justin on the day of my graduation from college in 1987.

As I finished up my bachelor’s degree in English literature and writing–and just before I married my second husband–I met the enthusiastic, alive-in-every-way man who would become my third husband. He taught at the university, was married at the time to his college sweetheart, and was my dear male friend who was kind enough to came to my wedding. Coincidentally when my second marriage was falling apart, so was his marriage, so we commiserated and our friendship became love. We will have been married 22 years in September and is the love of my life.

After working 29 years at the university, I was director of communications for the system-wide development office at UT. We raised money for the university’s scholarships, professorships, research, and medical schools, and I simply loved my job. We had an amazing team, the four of us, as we told the stories of our university’s supporters. Despite the usual chaos of university politics, we believed we were making a difference in the lives of our students, alumni, and donors.

It simply was not to be. Office politics reared its ugly head, and I was the fall gal who was forced out of her job in 2011. They were “kind” enough to allow me to reach my 30th year of employment which at UT was full, vested retirement. Since this was before Obamacare, I was quite lucky to have reached vested retirement and health insurance since at the too-young age of 53 years (too young for Medicare), I had only one kidney and probably would not have been uninsurable at any cost.

For the last six years, I have been a freelance writer. Luckily my retirement funds–and having a husband who is a management consultant and photographer–have meant I can be choosey about the jobs I take. My sister, Lisa, married the younger son of the Stanley family that owns Stanley’s Greenhouse, and she is the customer service manager of the greenhouse, doing a phenomenal job. Two years ago when she asked me to handle the business’s social media and website communications, I was proud to do so.

A part of me regrets I never became a history teacher in the shining examples of my high school teachers Mr. Baum and Mr. Ridinger. But I have never forgotten their friendship and how they encouraged me to think for myself. Although being a young woman of my era was devalued versus a man, they taught me to take myself and others seriously, and to learn from the lives of the historic figures in our past.

One of the last public telephones in Knoxville, Tennessee.

I am a writer. It is the gift I gained from reading, reading, reading throughout my entire life. Communication may have changed from the rotary-dial phones of my childhood to the push-button extension phones of my teen years. Newspapers have been beaten down by the electronic cacaphony and iPhone-news flashes of the present, but communication and journalism remains central to the ability of our country to genuflect toward its democratic ideals. These days it does not seem we have learned much from history. If investigative journalists do not shine the light on the dark deeds and hidden corners of our nation, we cannot be the America that saved the world from the Nazis in World War II.

Yesterday I was sitting at a gas station in West Knoxville filling up my car when I saw a sight I had not seen in years: it was a public telephone. In the era of second-nature cell phone use, I mused about whether I could even figure out how to make a long-distance call on a public phone–something that used to be a common occurrence. Even though I had no use for that public phone just at that moment, there was something comforting about knowing that even one public phone still existed in my hometown.