[On December 2, 2016, my dear father Roy Rotha Allen passed away at the age of 81. His health and memory had declined for years–but his health failed more precipitously over the past 14 months. Although Daddy had been hospitalized lately, he had been making progress in a rehabilitation facility, so his death came as a shock to us nonetheless. This is the eulogy I wrote for him and delivered at his funeral on Monday, December 5, at Hillcrest United Methodist Church.]

When I was a girl, I memorized Psalm 100 during Vacation Bible School at Woodlawn Assembly of God Church near our home in South Knoxville. My parents were members of Hillcrest Methodist Church at that time, but we visited our neighbor Mrs. Morie’s church for Bible school as well as attending our own.

1 Make a joyful noise unto the Lord, all ye lands.

2 Serve the Lord with gladness: come before his presence with singing.

3 Know ye that the Lord he is God: it is he that hath made us, and not we ourselves; we are his people, and the sheep of his pasture.

4 Enter into his gates with thanksgiving, and into his courts with praise: be thankful unto him, and bless his name.

5 For the Lord is good; his mercy is everlasting; and his truth endureth to all generations.

Daddy being irrepressibly himself at a 1996 wedding reception.

As a child I was so proud to have memorized this great psalm which exhalted singing, thanksgiving, mercy, and truth. As an adult, I believe the psalmist is also advising us to live passionately with great joy, community, humility, love, grace, kindness, and compassion.

“Make a joyful noise.” Those wonderful words I memorized spoke to me as a young girl, but I aso had an example of the Psalms’ concepts lived for me every day by my parents–and especially by Daddy’s playful exuberance.

Daddy was inordinately passionate about everything he loved–and everything he did not. He intensely loved his family (Mama and “his girls”: my sister Lisa and me), sports, music, and movies. He particularly loved the University of Tennessee Lady Vol basketball program, its players, and their legendary Coach Pat Summitt; UT football and basketball; South High School basketball; and the New York Yankees.

Daddy and his father in the backyard of my mother’s home, around 1955.

He not only loved music, but would talk rapturously about the orchestra conductor of his youth Montavani, the pianist Floyd Cramer, country singer Skeeter Davis, and, of course, Frank Sinatra.

Daddy spent his teenage years in Knoxville’s downtown movie theaters and religiously went to the movies until his health declined in the last few years. He particularly loved the ‘60s movies “A Summer Place” and “Dr. Zhivago”, and the actors Audie Murphy, Jeff Chandler, as well as the Academy-Award-winning star of today Matthew McConaughey.

He conbined his love for travel with his passion for the Lady Vols as he and Mama traveled around the world with the Lady Vols’ exhibition games in Europe, Alaska, and Hawaii, as well as to many of the team’s national championship tournaments around the country.

Daddy at his in-laws home, March 1957–around the time Mama got pregnant with me!

Daddy was passionate about New York City, biscuits and gravy, chocolate, his favorite brown shoes (that we have decided to bury him in), and wearing hats. He was a perfectionist that preferred the details of things to be just so.

My sister Lisa and I grew up singing along with one of Daddy’s favorite songs, Kitty Kallen’s 1954 hit recording of “Little Things Mean Alot”, written by Edith Lindeman (lyrics) and Carl Stutz.

Through the words of this song, Daddy helped us learn what was truly important in life–not being wealthy or powerful or having lots of “things”, but caring about people.

Give me your hand when I’ve lost the way
Give me your shoulder to cry on
Whether the day is bright or gray give me your heart to rely on
Send me the warmth of a secret smile
To show me you haven’t forgot
That always and ever
Now and forever
Little things mean a lot. 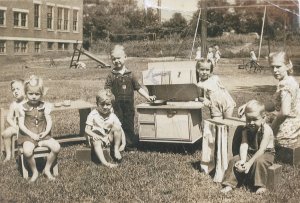 On the other hand, Daddy had strong feelings about the things he did not like as well. He detested cabbage–because he ate too much of it as a child–and he hated Pat Summitt’s antithesis and nemesis Geno Auriemma, along with the Lady Vols’ archrivals, the University of Connecticut women’s basketball program.

He hated turnips and was allergic to bananas. He could not abide injustice of any kind, being disagreed with, or loud noises since his eardrums had burst when he was child. Daddy’s eardrums were injured because his father refused to have his infected tonsils removed. As a result, my father’s eardrums, and his hearing were affected for the rest of his life.

Daddy grew up in great poverty and chaos since his dear mother Darcas Nickaline Montgomery Allen died just four months after he was born.

Daddy’s mother Darcas (second from left) and her family in 1906.

In the early 1900s, Darcas’s family lived on their 40-acre farm in Carroll County, Virginia. However as many land-rich, cash-poor Virginians in the decades after the Civil War, Darcas’s father John had to sell the farm to pay his debts.

John and Cordelia Montgomery moved their family nearby, in Fries, Va., where a new cotton mill was being built. Their father got some work as a carpenter, while Darcas and her younger sister Eutaw worked as teenage cotton spinners. After Darcas’s father died a few years later, their widowed mother moved her surviving children to Kingsport, Tennessee, where Darcas and her sister worked in another cotton mill.

The Montgomery family had originally been Quakers, but their mother Cordelia heard a missionary who traveled through Virginia and they became Mormons. Their oldest daughter Darcas was a delicate young woman and her mother concluded early own that she should never marry due to her sensitive nature.

As luck would have it however, somehow Darcas from Carroll County, Va., and Kingsport, Tenn., met (Roy) Hodge Allen from Knoxville, and they were married in 1934 when Darcas was 30 years old and Hodge was 31.

She got pregnant soon thereafter and gave birth to her only child, Roy Rotha Allen, in April 1935. Daddy was named Roy after his father and Rotha (pronounced Rothie by his Allen kinfolk) after an elder in the Mormon church.

Four months after she gave birth to Daddy, his mother was dead at the age of 31. According to her death certificate, Darcas died of pellagra psychosis. After finding Darcas’s death certificate online and doing some research, we learned that pellagra was an extreme nutritional deficiency that plagued large numbers of poor Southerners in the half century following the Civil War. Unfortunately for Daddy, his mother had an extremely destructive version of the disease that resulted in insanity as noted by the physician who signed her death certificate.

Daddy’s father, Hodge, was an illiterate butcher who worked on the killing floor of East Tennessee Packing Company and lived with his mother and alcoholic uncle. After Darcas died, her mother Cordelia offered to raise her daughter’s baby, but Hodge refused, so Daddy remained in Knoxville. At first my father was raised by his paternal grandmother, but she passed away when he was 5 years old. At that point, Daddy’s care became even more haphazard, and grim. Not surprisingly Daddy’s memories of his childhood were mostly of want, neglect, alcoholism, and abuse.

However, Daddy’s life brightened considerably when he met quiet, adorable, auburn-haired Arzelia Henderlight in school. He was immediately drawn to her, and wooed Mama until she came around to his way of thinking: that they should be together.

Sixty years ago, in 1956, my parents were married in Mama’s family’s church, Hillcrest Methodist. Just before Christmas the next year I was born, followed by my sister Lisa in the spring of 1959.

During his adult life, Daddy worked at many of Knoxville’s best-known local businesses. He was a bookkeeper at House-Hasson Hardware and White Lily Flour. He delivered bread for Kern’s Bakery and magazines for Anderson News. Then he started working at Stanley’s Greenhouse where Mama had worked since we were teenagers. 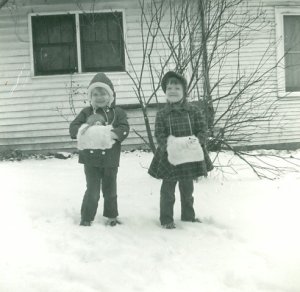 My sister Lisa and me in the snow outside our South Knoxville home, winter 1963.

In 1977 my sister Lisa married Rocky Stanley, Charles and Mary Kathryn Stanley’s youngest child, and after working at Lay Packing Co. and UT, Lisa joined the family business as well.

Daddy’s accomplishments in life, however, have nothing to do with what he did for a living; his influence was in the life he led. He loved strongly and without reservation. He was proud of his loved ones with all his being. His exuberance and encouragement held no bounds. He loved with a fully open heart and soul. He was passionate and proud and his smile opened up the gates of heaven for those who loved him. Even in his last year when his health was failing, he would smile and wink at me, and I knew with all my heart that Daddy loved me.

He inspired all his loved ones to their fullest. He accepted us as we were without asking us to make renovations or cut ourselves short around the edges. He lived a full life of love because he basked in the total love, care, and support that Mama gave him every day of his life.

Daddy and Mama at my son Justin’s wedding, March 2016.

And Daddy had his faith to sustain him. He loved gospel music, quartet music, and particular hymns and scriptures that spoke to him deeply.

Daddy was a lover—a person who loved. Daddy’s understanding of God was a big expansive universe of love and music and blessed assurance for a boy who grew up with very little that fed or spoke to his sensitive nature.

But Daddy sought and found the divine qualities of truly lasting value and he inspired us, his loved ones, with his example. Daddy found faith, hope, truth, justice, honesty, self-expression, creativity, dignity, and love. And the greatest of these is love.