Posted on October 1, 2016 by aamontgomery

Four generations of South Knoxvillians in 1960: my mother (with me on her lap, on the far right) seated beside her mother (with my sister on her lap in the center), and her grandmother (far left).

When I was a child in the early 1960s, my world was a fog of (1) trying to figure out the inexplicable behavior of the adults around me, (2) hoping to discern what they wanted me to do, and (3) doing it as expeditiously as possible.

During my childhood, the scariest person in my world was the white-haired principal of our elementary school named Miss McCallie (pronounced Ma-call-e). All I can remember about her is that she terrified me, insisted that every child clean their plate (no matter how nauseating and allergy-causing the food), and her favorite song was “Dixie”– the song that typified the Confederacy during the Civil War. Her preference for the song permanently ruined it for me.

Proving that the schisms that existed in Knoxville, Tennessee, during the Civil War continued a hundred years later, our high school chorus teacher had us sing the Union’s quintessential war song “Battle Hymn of the Republic” at the end of every concert. Although the Confederacy had its supporters in our town during the Civil War, East Tennessee had a national reputation for being staunchly Republican and when the Yankees took over the city in 1863, most of the populace welcomed them with open arms.

The Confederate dead behind the stone wall at Marye’s Heights, Fredericksburg, Virginia, 1863.

Besides the hatred caused by the two sides of the Civil War killing one another’s sons, husbands, fathers, uncles, brothers, cousins, and fiancés for five years, the war’s aftermath, the so-called Reconstruction Era, effectively disenfranchised and embittered Southerners in two important ways. Most of the war’s battlefields were in the South and thus Union soldiers’ dead bodies were scattered throughout Virginia, Tennessee, Georgia, South Carolina, and other Southern states. In order to ensure that gold-star families could have the bodies of their loved ones returned to them, the U.S. government paid to find, transport, and honorably bury the Northern dead. They also awarded pensions and widow’s benefits to Union soldiers and their families. Neither pensions, widow’s benefits, nor any sort of aid with finding, transporting, or burying the South’s dead was given by the federal government, however. It was as if the former Rebels were not truly citizens of the country the Union fought so hard to preserve.

Daddy’s mother Darcas (second from left) and her family in 1906.

Further the economic upheaval, cities and towns burned and looted, and the poverty and starvation that gripped the South in the wake of the war was still felt well into the 21st Century. Hundreds of thousands of Southerners died from nutritional deficiencies such as pellagra psychosis (leading to disfiguring skin conditions, insanity, and sometimes death) caused from a diet that relied too much on nutritionally inferior corn.

My family was especially affected by the disease. According to her death certificate, my paternal grandmother, Darcas (Daddy’s mother), died of pellagra psychosis in 1935, just four months after giving birth to my father. And unbelievably she died in Knoxville’s work house for the poor called the George L. Maloney Home.

My grandmother’s story is perhaps an instructive one. Her grandfather, a Virginian named Lindsey Montgomery, fought for the Confederacy. When she was a young girl, Darcas’s father, John, lost the family farm in Carroll County, Virginia, so she and her sister worked in a cotton mill as child laborers. 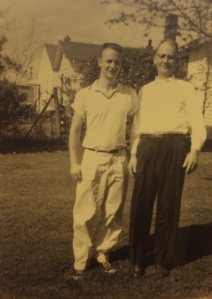 Daddy and his father, Hodge, just before my parents were married, probably 1955.

Daddy’s father was illiterate, but my father attended school until he dropped out of high school in the 10th grade. I doubt Daddy’s father ever voted, but when I was growing up Daddy referred to himself as “a Nixon man”. Although my first presidential vote was for fellow Southerner Jimmy Carter, I’m sure Daddy voted for the Republican challenger, Gerald Ford.

Somewhere in the ’80s, however, my father’s political allegiance changed as he began to see that the Grand Old Party of his youth was not taking care of lower-middle-class people such as my parents. Thus, Daddy started voting for Democratic candidates such as Presidents Bill Clinton and Barack Obama–and the Democrats who were not successful in their quest to lead the country, such as Michael Dukakis, Walter Mondale, and John Kerry. 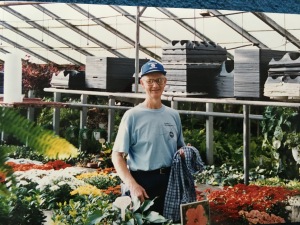 Daddy at his last job at Stanley’s Greenhouse, early 2000s.

In the last few years, Daddy’s health began to falter and his world became smaller. He no longer wanted to go to church, and he could not drive himself to the movies which had been his great passion. He lost so much weight that finally it was no longer possible for Mama to care for Daddy at home. A year ago we placed him in the best senior care facility we could find that was within close driving distance for Mama.

For awhile Daddy flourished in his new environment. He loved the food; he found some of his fellow residents delightful; and Mama was there for him every day to make his life full and comfortable. He gained weight and his health improved.

Three months ago, however, Daddy fell and broke his hip. Although the minimally invasive hip replacement surgery was completely successful, we began to understand why so many people say the beginning-of-the-end for the elderly is a fall, resulting very often in a broken hip. And so it has been for Daddy who, at first seemed to come through the surgery very well, but has since suffered a downward trend that we have not been able to halt.

After his mother died when he was 4 months old, Daddy was raised by his paternal grandmother. Photo probably taken in 1936.

My father keeps losing weight, and he has become so frail that he can no longer walk. He can barely move himself as Mama and I work together to try to get him into bed at night after dinner. He is so tall and has such large bones that Mama and I can barely get him into position in bed–even when he says he is comfortable, his knees are still sticking up because he cannot move himself and we cannot get enough leverage to move him so his head will be at the top of the bed.

Yet Daddy’s mental and social capacity soldiers on as he asks me where my husband is traveling and how I am progressing from foot surgery. He reaches out to his fellow residents at meals and tries to soothe them when they are upset. He smiles and winks at me; and I smile and wink at him. Daddy repeatedly thanks me for being with him, saying my presence makes his day. He thanks me profusely for everything I do to make his life better and for bringing him goodies that he might decide to eat (honeybuns and chocolate muffins–his beloved chocolate!) or drink (apple juice and nutritional supplements).

The other day, Daddy and I were sitting at the dinner table of his facility, and he turned to me and said, “Anna, what do you think about this presidential race?”

Not wanting to upset him, I remained noncommittal and said, “Oh, it is very exciting, isn’t it, Daddy?”

He said firmly, “Well, I am for the woman because I think she is smarter than the man.”

To which, of course, I responded, “I agree with you completely, Daddy. I am for the woman too, and I think she is smarter than the man. You are so right, Daddy.”

Since my father had expressed a preference in the election, I began to muse about how to ensure that he would be able to vote. Since he is too frail for us to take him to vote, I decided to request an absentee ballot for him from the local election commission. In response they sent a letter saying that Daddy would have a chance to vote at his facility on October 28. It was not clear how this miraculous voting moment will happen–will special officials come to Daddy’s senior living facility and ask his preference? Will they set up voting booths in Daddy’s facility to accommodate the 60 or so infirm seniors housed there?

Increasingly it has become an ever-changing situation as Daddy’s frailty and lack of strength becomes more pronounced with each passing week. Will he be alive in late October? Will he make it to Election Day? We don’t know the future for him, but I would so much like to make it possible for him to cast his vote. This would be his first vote for a woman president, just as my Southern gentleman of a father voted for the first black president eight years ago, and then voted for him again four years ago.

Daddy and Mama were raised in a segregated South around many racists. As I was growing up, our city became more desegregated under various court rulings, but many white families fled the city or sent their children to parochial schools so they would not have to attend school with black children.

Even an astounding 151 years after the Civil War ended, our supposedly “United” States are still torn asunder by racial strife and division. If President Abraham Lincoln visited our country today, he would be confounded to see that many of the problems that existed under his presidency are the same now: sectarianism, bigotry, absolutism, political turmoil, politicians unable to compromise for the greater good, and fear of people from another “tribe” whether they have a different color of skin or have recently immigrated to America seeking a better life.

I cannot fix all the vitriol and poison I see around me. Sometimes I despair and cannot resolve how to go forward in a supposedly civilized country where so much hatred is spilling onto the streets. It made me sick to my stomach to see a caravan of white supremacists on the main street of Knoxville last February with their huge “Don’t Tread on Me” flags, hatred on their faces, and their radicalized search for revenge for what they believe they have lost. I can only think that much of their hatred stems from their fury that a black man has been our president for nearly eight years and there has been nothing they can do to change that.

What I can do is try again to get my father an absentee ballot so that in one particular area of his life–his right to decide who to vote for, and to cast his vote accordingly–Daddy can still be a full citizen of his country. This will probably be his last vote, and just maybe, his most important one.