Our Corner That Keeps Flapping Around 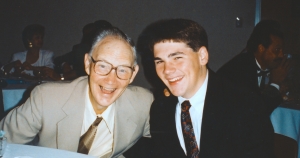 Daddy showing his exuberant personality with my son (and his grandson) Justin in 1996.

Nearly twenty years ago, my father Roy Allen retired at the age of 62. Daddy’s passions were (1) his family (especially his fellow sports maniac, his grandson Justin), (2) Lady Vol basketball, (3) New York Yankees baseball, and (4) traveling with Mama to the annual tournaments the Lady Vols played in places like Alaska, Italy, Greece, and Hawaii.

Around 10 years ago, however, we noticed a significant change in Daddy as he increasingly could no longer tolerate his former joys of attending basketball games, traveling with the Lady Vol basketball team, or even joining us for family birthday dinners. His behavior became slowly more paranoid and erratic, and inexorably he withdrew from nearly everything around him. 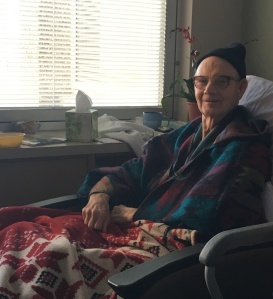 In October 2015 the decline reached a critical juncture as we were given information about hospice and other difficult choices when my 6’2″ father was hospitalized weighing just 133 pounds–only a little more than I weighed at 5’4″. Having been diagnosed a few years ago with Alzheimer’s type dementia, Daddy was now refusing to eat or take his medication, ending in too many ghastly moments of belligerence and paranoia — and eventually to dire consequences. If he wouldn’t eat, he couldn’t live. Yet, alongside his illness, Daddy had a dream: to be best man at his grandson Justin’s wedding.

With his sweet sentimental eagerness, Daddy got out ahead of the game plan on this budding romance. Justin had started attending church with my parents where Tracy played the piano for services and attended with her parents. Daddy urged Justin to ask her out, but Justin did not think it was appropriate for them to date in view of their 10-year age difference. “I’m too old for her, Papaw,” he said.

But eventually Justin decided to ask her out, and he and Tracy were delighted (and a bit surprised) when their first date was full of laughter, and they found they had many things in common. At church the next Sunday, Daddy told Tracy’s mother, Vicky, that Justin and Tracy were going to get married and he was going to be Justin’s best man. Vicky laughed, nervously I’m sure, and said they should not get ahead of themselves, since the couple had only had one date. But Daddy’s prediction was accurate, their chemistry was palpable, and soon Justin and Tracy were inseparable and deeply in love.

After a year or so, Justin asked the love of his life, Tracy (his Duchess, as he calls her), to marry him, and they set the wedding for September 4, 2016. When my father’s decline came to a crisis point in October, the wedding was nearly a year away and, in Daddy’s weakened condition, we did not think he could make it. Tracy took the situation in hand and suggested moving the wedding to March to increase the likelihood that Daddy could attend. We were hopeful that perhaps Daddy might improve and live long enough to realize his dream to “stand up” with Justin at his wedding. 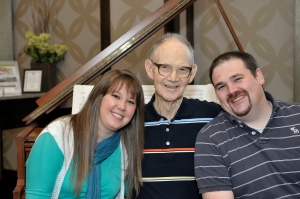 At Oakwood Senior Living facility, Daddy with Tracy and Justin on Thanksgiving 2015.

At the hospital, followed by the rehabilitation center, Daddy made progress: he ate a little more, we discovered a medication he could tolerate that addressed his paranoia, and slowly we worked on assessing the long list of medications he had been prescribed throughout the years. It was obvious Mama could no longer care for Daddy at home, so we began what we feared would be a long process to find somewhere suitable. We were shocked that the first place we visited was brand new, well appointed, conveniently located, and affordable. Voila! We had a plan.

Miraculously Daddy loved the facility, the food, his fellow residents, and began to gain weight and strength. He took his medication with no hesitation and acted more like the father I remember from a decade or so ago. Instead of funeral plans, we had the amazing gift of Daddy: smiling, making jokes, laughing with us, and celebrating with high fives after he placed the final pieces in the 100-piece puzzles we worked together.

By Thanksgiving, Daddy could walk steadily on his own, and in the new year he began asking daily how many days it was till the wedding. We helped him get fitted for his tuxedo, and as February came to an end, the wedding was only six days away. 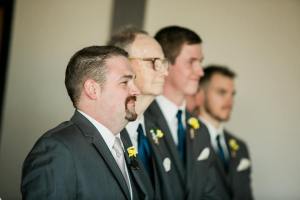 The groom Justin; his best man Daddy; and the groomsmen Carter, Mark, and Corey wait for the bride.

Despite Daddy’s progress, Mama decided against his participation in the rehearsal and rehearsal dinner the night before the wedding. So it was that the wedding day of March 6, 2016, dawned sunny and mild with Daddy rested and ready and eating a hearty breakfast.

After lunch Mama helped him into his tux, as he was eager to see Tracy and Justin ever so happily married and do his duties as best man. Since Daddy’s memory is sketchy, one of the groomsmen was recruited for one of his duties: holding onto Tracy’s wedding ring. 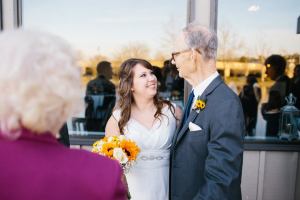 Tracy and Daddy share their mutual affection just after the wedding with Mama in the left foreground and reflected in the glass beside Tracy.

Finally it was the appointed hour for the groom and his best man to enter from the right and stand before the wedding guests as the groomsmen accompanied the women of the wedding party to the front. As I sat down on the front row on the groom’s side, I noticed Justin and Daddy were holding hands. Through misty eyes, I watched Daddy standing tall, erect, and serious about his duty as he and Justin stood together waiting for the bride to enter on the arm of her proud father, Ronnie. 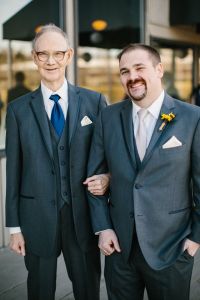 Daddy showing his characteristic smile as he holds onto Justin’s arm after the wedding.

Breathtakingly lovely in her white dress, Tracy came down the aisle and was given a sweet kiss by her father. She and Justin exchanged vows filled with the love that was apparent in their eyes. Just before the pastor called for the rings, Daddy grew shaky and sat down beside Mama on the front row. A few moments later Tracy’s wedding ring made its way down the row of groomsmen for Justin to place proudly on Tracy’s finger.

The hubbub of wedding guests moved toward the reception area while the main room was prepared for the wedding dinner. As for our family, we were filled with joy to see Daddy realize his dream to be Justin’s best man — just as we were elated to see Justin realize his dream of marrying his lady love Tracy with Daddy at his side. 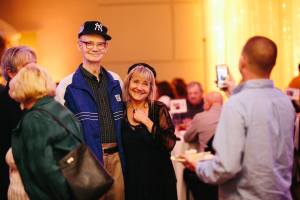 The wedding photographer captured Daddy in his New York Yankees cap leaving the wedding on the arm of my sister Lisa.

Knowing Daddy was tired from the unaccustomed activity and excitement, Mama moved him to a table where he sat until he was needed for picture taking — which puts me in the mind of an apt quote I discovered a few years ago.

Happiness is excitement that has found a settling down place, but there is always a little corner that keeps flapping around.

Daddy is our blessedly sweet corner that keeps, ever so exuberantly, flapping around.

3 Responses to Our Corner That Keeps Flapping Around