The Cure for the Pain 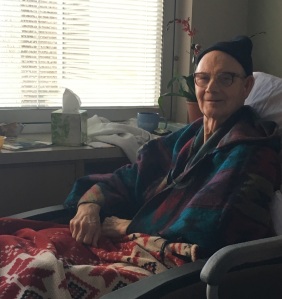 By some peculiar alchemy of dementia, there are flashes of light when the seeming blindness of Daddy’s soul and withdrawal from everything around him subside. At those moments, there is a window to Daddy who is occasionally still there in his once 6-foot, 2-inch body that now weighs only 133 pounds–eight pounds more than I do, his 5’4″ daughter. When I hear singer-songwriter Gretchen Peters’ song The Cure for the Pain, I think of Daddy and this captive journey we are on.

There he sat in the hospital emergency waiting room’s wheelchair in an unseeing vegetative state, his hunched-over body waiting–uncaring, and unresponsive–as we, his family, talked around him. After we finally scored him a bed, he became impatient and belligerent when he could not follow the ER doctor’s questions or orders. “Can you follow my finger with your eyes, Mr. Allen?” No, he could not. At times it wasn’t at all clear that he knew us. He wanted up, and although he was too weak to stand, we had to ask for medication to keep in bed.

damn the truth, and damn these lies
damn that look behind your eyes
damn this day, damn this night
and damn this losing fight

It has been years since I have really seen my father. When I visited my parents recently, Daddy has seemed entirely divorced from himself with no one at home in his eyes. Uncomfortable, miserable, never satisfied–that has been his life. And sitting alone in the basement, too cold to come upstairs even in the heat of summer.

Yet, the morning after he got a hospital room, he smiled at me ever so sweetly, the lights back on in his mind. He winked at me with one eye, then magically the other and said, “You have always been my favorite daughter, Anna,” to which I could only say, “I know, Daddy, but we won’t tell Lisa.” He added, “I love you soooo much.”

Daddy giving me a bath when I was a baby.

Perhaps our closeness comes from the fact that he took care of me as a baby while Mama worked, or because we are more alike than Mama or my sister Lisa. But he has never left any doubt that he loves both “his girls” and has been soooooo proud of his daughters: Lisa the popular cheerleader and me the bookworm.

A half biscuit for breakfast, a few carrots for lunch, a bit of peach cobbler, and the days’ meals go untouched. The water was not hot enough, but then too cold, he won’t take his pills, oh, how this gets old.

so bless these pills, bless these sheets
bless this food that you won’t eat
bless the damned who walk these halls
and god have mercy on us all

I talked to the house doctor and got his perspective; listened as the social worker outlined resuscitation scenarios; argued with the case manager for a better rehabilitation center; went to lunch, came back and Mama had already signed the papers for the rehab center nearby. So the next day he was off to rehabilitation although rehabilitation for what we did not know. 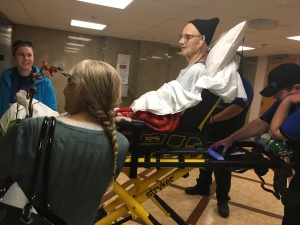 Daddy being moved from the hospital to the rehab center with my sister Lisa in the left foreground.

Somedays at the center my father is content to stare at the muted TV, doze after therapy, smile sweetly, and kiss my hand. But other visits do not go as well. “I want to know which of my daughters, you or Lisa, love me the most. Which one of you will take me home?”

“That one over there,” he pointed to Mama, “Won’t take me. So I want to know, Anna, do you love me? I’ve done what they told me. I did my therapy, the bike, walked the steps like I do at home. I want to go home.”

“You need to stay here and get better, Daddy,” I offered weakly. He look at me witherly and declared, “Lisa loves me; she’ll take me home.”

“You need to stay here, Daddy.”

He would not look at me directly, but cut his eyes occasionally in my direction. When I asked the nurse to give him another pill to make him calmer, he refused to take it. Then  he pointed to me and told the nurse, “I’ll take it if she leaves the room.”

A few years ago Daddy was told he had dementia, and would say to us, “Dementia’s bad.” His psych doc said he probably had Alzheimer’s and should not drive, but he continued driving anyway. He bought a new SUV, and promptly drove it through the back of his garage into the yard, completely totally the car. The brake malfunctioned he said, but it was clear he mistakenly pressed the gas pedal instead of the brake.

His paranoia worsened and he slept with a loaded revolver under his pillow; the doctor said it had to go. After the second attempt, we got it out of the house. Daddy was furious, replaced the gun’s spot under the bed with a hatchet, and told Mama there were knives in the kitchen, and he would kill himself if he didn’t get his gun back.

When his threats did not get the desired result, Daddy asked Mama to have my sister bring the gun back unloaded. Although Lisa did not return his gun, Daddy drove to WalMart for a box of ammunition while Mama was at church. Mama found the ammo in his closet this week.

My dear grandmother, Darcus Montgomery, with my grandfather Hodge Allen, on their wedding day in 1934.

Daddy’s mother Darcas Montgomery Allen died when he was four months old, so he never knew her. Only a few years ago he saw what could be a picture of her when Mama noticed a picture on the wall of Daddy’s cousin Evelyn’s room at her assisted-living facility.

Since Daddy’s father married three times, we could only guess that the photo might be Daddy’s parents on their wedding day in 1934. My father’s dad Hodge and his relatives told Daddy little about his mother: that her family was Mormon, her brothers lived in Kingsport, Tennessee, and she was buried in Virginia.

After years of Internet and local geneological research, my husband Kurt and I set out for Carroll County, Virginia, a few days ago to bring back photos of Daddy’s mother’s grave and any information about her family that we could share with him before his memory was completely gone.

Carroll County pioneers William and Rachel Montgomery had come from Ireland to Virginia in the mid-1700’s, and acquired hundreds, perhaps thousands, of acres of land. This was and is fertile farm country and in the intervening centuries, most of the Montgomery family descendants have sold their farms leaving family cemeteries on what had once been their land. After visiting four or five such family cemeteries that were not my family’s resting place, we got directions and a map from the local funeral home, and asked directions of a lovely woman who lived near the site. Without the help of these warm and wonderful people of Carroll County, we would never have found the site in a huge pasture with a fenced-in area near a grove of trees. It was cold, raining, and windy as we walked to the gate. 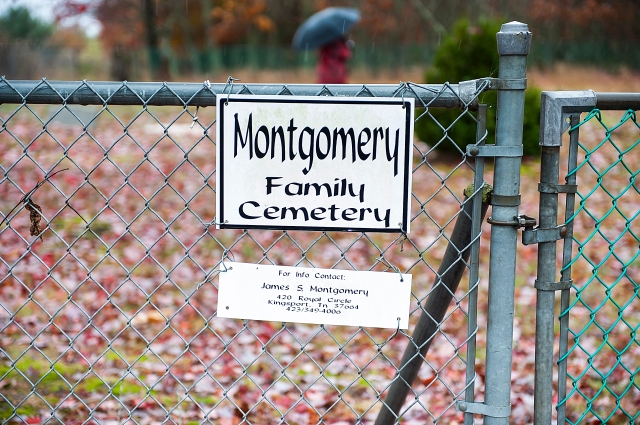 The sign at my grandmother’s family cemetery in Carroll County, Virginia, and me in the background.

The first few graves to the left of the entrance were distant relatives followed by my great grandparents’ John Martin and Cordelia Montgomery’s graves. When I saw my grandmother Darcas’s gravestone between her mother and her little sister Luva Vera who lived to be only 10 years old, tears ran down my cheeks. I was so happy to have finally found her and sensed her sweet, serene, humble spirit on that cold rainy October day.

Buried beside Darcas and Luva Vera were their sisters Rose Elizabeth, who lived only one day, and sweet little Willie Hazel, who lived to be only 1-1/2 years old. Heartbreaking the loss of so many children, as well as Darcas who died at the age of 31, just a month before her 32nd birthday.

Darcas’s brothers Robert and Clarence, as well as Clarence’s wife, Janie, were buried at the family cemetery as well.

After Darcas’s father sold their 35-acre farm in 1917 when she was 14, Darcas and her family moved to neighboring Grayston County where she and her sister Utah, who was two years her junior, worked as spinners in a cotton mill located in Fries (pronounced Freeze), Virginia.

I walked the path my grandmother walked when she went to work at the cotton mill as a teenager.

The town was a new one created around the mill in 1903 and ran with the electric power from a dam placed on the swift running river beside the mill. It was a wonderful feeling to walk the path my grandmother would have walked when she went to work each day.

The mountains and woodlands were gorgeously full of color, and we were so happy to have photos to share with Daddy and allow him to see his mother’s grave for the first time. Since I had a realtive’s name, a Kingsport address, and a phone number which was on the family cemetery gate, I left a message for my distant relative telling him that we hoped to get to know him and his family, and would be pleased to receive copies of any photos he can share with us of Daddy’s mother and family–before his dementia closes that door to him.

When I got back to Knoxville and went to see Daddy at the rehab center, I showed him the photo of his mother’s grave. He said, “She died when I was a baby.” And I said, “Yes, she did.” It appeared to me he had trouble taking in the enormity of this new information, but when Mama visited him that evening. she asked him about it, and he remembered the photo.

So, for us, the cure for the pain is the love of family–the family we have known all our lives as well as the family we know only in spirit–and doing what little is left to us to follow that line of hope and close the circle of love.

5 Responses to The Cure for the Pain

MNK.
chrissyadventures.wordpress.com/
Life Out of the Box
found objects creative