Thunder Still Rolling in the Mountains 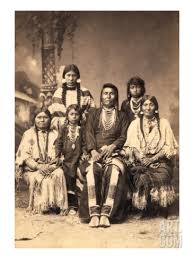 Thunder Rolling in the Mountains (also known as Chief Joseph) and his family in 1880.

Perhaps because they lived so close to the natural world and recognized kindred spirits and sacredness in everything around them, the words of wise Native Americans echo through the ages with the same truth they carried when they were first said.

When we were in New York City last week, my husband and I visited the Smithsonian’s New York version of the Museum of the American Indian. One of the exhibits we saw featured the words of Chief Joseph of the Niimíipuor (pronounced nee mee poo) or the Nez Perce as they were commonly known. In their language, they called themselves “The People”, and they once lived in what is now Washington, Oregon, Montana, and Idaho.

Thunder Rolling in the Mountains of the Nez Perce people.

Native Americans named each member of their tribe according to his or her own special qualities. In his language, Chief Joseph’s name was Hin mah too yah lat kekt which meant Thunder Rolling in the Mountains. His words from 1879 resonate for us today in a world and a country filled with divisions, strife, hatred, and old enmities nursed for hundreds, sometimes thousands, of years.

Hear the truth in the words of Thunder Rolling in the Mountains, chief of the Nez Perce people who fought the U.S. Army to live on their homelands:

If the White Man wants to live in peace with the Indian, he can live in peace. There need be no trouble. Treat all men alike. Give them the same law. Give tham all an even chance to live and grow. All men were made by the same Great Spirit Chief. They are all brothers. The Earth is the Mother of all people, and all people should have equal rights upon it.