Posted on January 6, 2015 by aamontgomery

Ok. Stop everything you are doing and run out and see the Indian (as in Asian, not as in Native Americans) movie called “PK”. I’m gonna fully admit something here, but I have not had time to do my usual research and tell you the name of the actor who stars in this movie and who, according to the really nice guy who serves us at our favorite Indian restaurant, releases a movie around Christmas every year.

Alright keep your shirt on, I just looked up his name which, according to the ever-helpful Internet, is Aamir Khan. Apparently Khan is a one-man band of fabulous in India. What I can’t understand are the contradictions with this outrageously talented man. One, I have never seen an Indian bodybuilder. Two, he can do comedy and drama (a la Cary Grant) with both hands tied behind his back. Three, I have never seen anyone who so successfully channels the great screen legend Charlie Chaplin. And he can dance.

Check out Aamir Khan’s eyebrows that should have been credited separately in his new movie “PK”.

You are probably wondering what is up with this movie. Well, it captures nearly every genre rolled into one action-packed film: comedy (which is the hardest category to do really well), drama, science fiction, fantasy, romance, musical, and Bollywood (an Indian film with classic Indian elements of stylized dancing, music, and romance). But don’t let this description frighten you, those who hate musicals or science fiction, this is an all-around delightful, yet thought-provoking genre bender. It is simply one of the best movies I have ever seen. And what an inventive story and screenplay! You really must see it for yourself to believe it.

Gorgeous Anushka Sharma, Khan’s co-star in “PK”, the movie that has earned $60.5 million to date.

The movie is two and a half hours long, I grant you, and it is subtitled, which will count out about 75 percent of you. Bbbbbbut for you hearty stalwarts who want to see a revelatory, one-of-a-kind movie and don’t care that it isn’t up for one of those kiss-of-death Academy Awards, run, don’t walk, while “PK” is still in theaters.

Note to my blog followers in Knoxville, Tennessee: the film is currently playing at 2:00 p.m. and 7:05 p.m. at Regal Downtown West Cinema. Since it is down to two showings per day, there is a good chance the movie will be leaving after this week, so see it before Friday if you want to catch the full-screen experience.

Also for my fellow Knoxvillians, check out the newly opened (December 12) eatery Fresh to Order on the UT campus at University Commons Way (the new complex that houses Publix and WalMart on the west end of the University of Tennessee campus).

Beverage heaven at Fresh to Order in Knoxville.

The food is fast and delicious which is a rare occurrence, and they have gluten-free and vegan menus. Don’t miss the unique beverages choices that includes tea with green apples and cinnamon as well as filtered water with mint, strawberries, and lemon.

The lentil soup is delicious, and the roasted vegetables are charred on the grill. And if you get the gluten-free salmon tell them to cook it medium because without the regular sauces it can be too dry.

And for those of you who are looking for a diverting read to start the New Year, check out Hello from the Gillespies, the latest novel from Australian-born, Dublin-based author Monica McInerney. 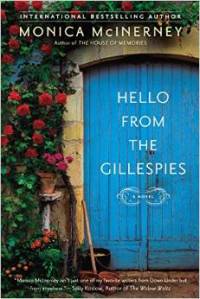 Instead of her usual la-la, my-world-is-perfect Christmas letter, the novel’s main protagonist Angela Gillespie (who lives on a vast farm in the Australian outback) types an e-mail letter featuring her innermost thoughts about (1) their once-close marriage, (2) her husband’s turning their formerly productive farm over to a mining company searching for minerals, and (3) the unending-train-wreck lives of her three grown children. 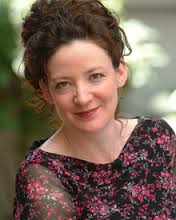 Australian born Monica McInerney who wrote the novel Hello from the Gillespies.

Angela means to simply write the e-blast and delete it, having gotten the rant off her chest when she is distracted by her young son’s mishap with a kitchen knife. While she is at the hospital, her husband (helpfully) sends out the message on her behalf with all sorts of unexpected results.

This book will resonate most with people who are dealing with (1) change, (2) unreasonable family expectations, and (3) the feeling of being alone in your own murky puddle: which is of course, all of us!

So Happy 2015! And, as author John Irving would say, keep passing those open windows!