[An oldie-but-goodie repost of our June 2013 excellent visit to West Tennessee!] On our recent adventure to Memphis to photograph an incredible wedding celebration, my husband Kurt and I had a few moments to take in the flora and fauna of Memphis. And by that I mean, the art house movie theater and the food, which is by far two of the most compelling reasons to visit a megalopolis.

The Frances Ha poster outside the Malco Ridgeway Theatre in Memphis. If you look closely you can see the reflection of the photographer.

Sooo, my husband Kurt and I had been wanting to see the intriguing-sounding and favorably reviewed new film shot in gorgeous black-and-white, Frances Ha.

The screenplay was written by Greta Gerwig (who wrote herself a wonderful role as Frances) and Noah Baumbach (who is Greta’s real-life love and director of the film). Digression: Greta and Noah met when he directed her in another movie which I haven’t seen called Greenberg.

Anyway, we were pleased to see that Memphis had an art-house theater called the Malco Ridgeway Four, and to our delight it was showing Frances Ha which is now also playing here in Knoxville as well.

One of my favorite photos of the Jada and Brian wedding that we photographed in Memphis.

The day began in a small way since we were quite spent from photographing (Kurt) and art directing and chasing wedding party members (me) 1800 or so photos in two days (rehearsal, rehearsal dinner, pre-wedding, wedding ceremony, posed after-wedding shots, and rockin’ post-wedding dance). But the day after the excitement of the perfectly fabulous wedding turned out to be a food-and-film epiphany. 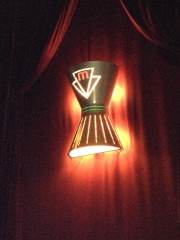 The interior of the Malco Theatre

Having seen art-house films at theaters in London, San Francisco, New York City, Nashville, Atlanta, and other cities I am probably forgetting now, we thought we had seen the finest movie theaters of the species. We were, however, mistaken.

Alliteratively and figuratively, the Malco Ridgeway in Memphis beats all the theaters in London and San Fran hands down. Ok, we had seen real food instead of plastic butter on artery-clogging popcorn and sugared syrup water offered at the Lincoln Center art theater in New York. But we had never seen delicious looking cheese and fruit and an entire menu of other offerings.

Nowhere had we seen comfy leather-looking seats with plenty of room in all directions. And the bathrooms! Flowers, air freshener sticks, mood lighting, and individual napkin-sized hand towels the size of Texas! We felt like hicks who had never seen the big city when we began taking pictures of all this finery with our cellphones (even in the bathrooms). Yes, we did.

The projection system was good, the side aisles sometimes had only three seats abreast, and plenty of well-dressed, yowsa people ambled in after us to enjoy the show.

Ok, you ask, what about the movie. Well, Greta Gerwig as Frances was on the surface nothing like me. Frances is tall, yappy, disorganized, messy,  socially awkward, and lies a good deal. Not only does she smoke like the proverbial chimney, she doesn’t particularly care about what she wears, makes an embarrassing series of self-destructive decisions, and doesn’t share her true feelings with the people closest to her. Not me, not me, not me, not me.

Frances on the streets of New York

But somehow the essence of Greta’s Frances came through: her creativity, love for dance, need for expression, yen for true closeness with her girl and guy friends, and her overwhelming joie de vivre in even the most ordinary situations such as walking (or running) down the street.

After the movie ended, I asked Kurt, “Who does she remind you of?” Thinking there is no way that he could get it right. But I suppose 21 years together has cemented Kurt’s ESP in my direction because he pointed his index finger at me. Yes, right answer, baby; first time!

It was weird to see myself so clearly in another person who is in many ways nothing like me at all. Sometimes the movie hit a bit too close to home, making it decidedly uncomfortable to watch. But in its entirety, it was quite sublime and joyous. See it if you can.

But for us the Malco adventure was not over. It had rained while we were in the movie and, on another pass around the theater lobby, we noticed the sumptuous sofa and beside it, as Kurt pointed out, beaucoup issues of the of-the-moment, insiders-who-know-entertainment magazine ($199 a year, no less!) The Hollywood Reporter. Too much! This theater was too much!

Outside I noticed for the first time what could be the reason the theater is so beautifully designed and cared for: the Malco Theatre corporate offices are behind a door near the entrance to the theater. I can imagine the Malco executives doing movie screenings and chowing down on decent food and wine, and they only have to take a short stroll to do it. 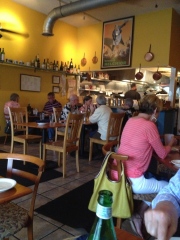 The coup de grace of this perfect day was capped by a Provencal (food inspired by the cuisine of the South of France) meal at Memphis’s Cafe 1912. It reminded me of a beautiful little bistro we had been to in Austin. Amazing food, impeccable service, and chocolate mousse for dessert. Yum! And they could accommodate my need for gluten-free food. Heaven!

So, if you have a mind to visit your real movie theater self, you could find your alter ego behind the doors of a really ritzy and thoughtfully decorated movie theater in Memphis–or perhaps some other lovely theaters exist in LA or France, the meccas of cinema. I can’t tell you for sure because we didn’t see movies when we were in Paris because we didn’t find the time to track down a theater with English subtitles, and I have never been to Los Angeles. But I can tell you for sure you can have a divine time at the Memphis Malco.

Me in the window of Cafe 1912, as photographed by Kurt on his cellphone

I can’t really share how Frances Ha got its clever title without ruining the surprise waiting for the enterprising ones of you who want to see the movie. But suffice it to say it is a satisfying, well-worth-it reveal that gave me an a-ha moment.

With a smile, I watched the screen and knew the title-revealing scene was indeed exactly what Frances would do. She and I have many experiences where we learn, a-ha, about ourselves.

For that’s what we are really are: bundles of contradictions. I like to think that I am a rather easy-going, cheerful, inordinately curious, and resourceful person. Little things mean a lot to me; found objects can be turned into spun gold of creativity. And yet, I learn about my complicated, yet simple, self as I go through life, surprising myself constantly.

Many times I have given myself reason to remember the adage that goes, “Life is like learning to play the violin in public.” And it can be messy. And painful. But also glorious, musical, enrapturing, and transporting.