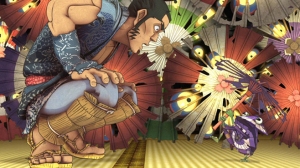 Run, don’t walk to your local art house theater and watch an Oscar-season first for movie lovers in the hinterlands: a one-seating compilation of all the animated shorts nominated for this year’s Academy Awards! This may be the manner in which Academy members get to choose who they will vote for as the winner, but this is certainly the first time I have ever had the opportunity to see the animated short features. And what a sublime watching pleasure most of them are: 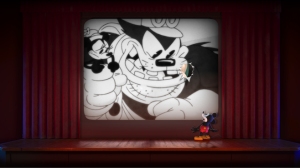 Disney’s animated short, “Get a Horse”

Disney’s sparkling offering, “Get a Horse!” somehow features the voice of the long-dead Mr. Walt Disney himself as Mickey Mouse.

The entire cartoon’s running time is Mickey’s madcap race to save Minnie–both inside and outside of the movie screen–from a dastardly villain. 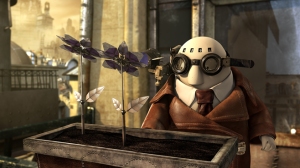 Mr. Hublot, the entry from Belgium/Luxembourg

My second-most favorite of the five nominated films, is the creative Belgian/Luxembourg short “Mr. Hublot” which tells the story of a dystopian little obviously obsessive/compulsive man. Mr. Hublot’s four-walls life is changed and quite literally enlarged in some rather hilarious ways when he braves leaving his apartment to save the life of a dog he sees from his window. So fresh!

I actually fell asleep during Japan’s “Possessions” which thankfully was just long enough for a short nap. Neither did I care for “Feral” which, despite keeping me awake, wasn’t as visually appealing or as infectious as the other films. 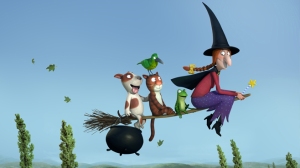 “Room on the Broom” from the United Kingdom

The obvious winner in my view–and my husband Kurt agreed as well–is Britain’s “Room on the Broom” with the delightful witch on the broom voiced by “The X-Files” alum Gillian Anderson. “Room” tells the story of a kind-hearted witch who, along with her trusty sidekick cat, has the opportunity to answer the question of whether there is room on her broom for some freeloaders in peril (a dog, frog, and bird) as they try to outfly a terrible dragon! Arghhhhh! Besides featuring a wonderfully sublime rhyming poem throughout, the short includes a winning theme about outsiders banding together to escape the bullies of life. And it is just plain adorable. 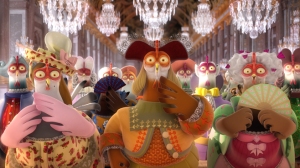 The hour-and-a-half running time of this collection also includes shorts the Academy thought warranted honorable mention. One of these so-called also-rans was one of my favorites. France’s “A La Francaise” took us to Versailles in the 1700’s for the court of Louis XIV–all chickens in voluminous wigs and ridiculous costumes. This was the cartoon that had me laughing to tears–and, truth be known–was the funniest by far, in my estimation!

So this year when you are asked to choose the winner from the animated short nominees on your Oscar ballot, for the first time you may actually have an informed opinion. Sooo run don’t walk, and do as my romantic husband and I did on Valentine’s Day: see the year’s funniest, most life-affirming bit of creativity to make you feel better about this whole loooonnnnngggg winter!!! Enjoy!

And Knoxvillians, it is playing now at Downtown West!!!