My Pony Likes to Jump!

When our city put three speed bumps (or “humps”, as they were unfortunately described by the accompanying signs) on our street, our neighborhood association’s block captains cheered. My husband and I did not agree the bumps were a good thing, made jokes about the signs, and bemoaned how our lives must be faster paced and more complicated than our more sedately ambling neighbors.

We had only lived in our new house a few months when we were “welcomed” to the neighborhood by a woman who shook her fist as I drove by and angrily yelled, “Slow down!” 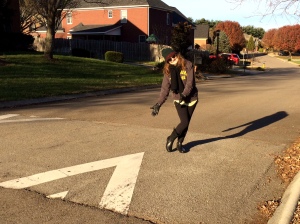 Me and the speed bump nearest our house.

I had been raised where people generally minded their own business. Everyone was too busy working, raising their children, fixing dinner, or just plain living their lives to bother telling their neighbors how to live. We kids were taught to stay out of the road so we wouldn’t be ran over, not to play baseball or football in the street as kids did here.

One post-speed-bump-installation day, I was driving my younger son Aidan to school, and we were running late as usual. I got up a head of steam and took the speed bump at a sharp clip with my car airborne for a satisfyingly wonderful moment, and I said, “My pony likes to jump!”

A beautiful 1999 black Honda Accord that looks similar to my beloved Blackie.

We took the other two bumps at the same speed and the world was our oyster! There was nothing we couldn’t do now! With its standard-equipment spoiler and wicked-cool design, Blackie, my souped-up 1999 V-6 Honda Accord–and favorite car ever–took the bumps with serene aplomb. Nothing brought that Accord low and Lord knows, girl, she LOVED to jump!!

Yeah, she was an extension of me, that beautiful queen of a car! Aidan loved her so much that when he learned to drive and needed a car of his own, I gave him Blackie to get wherever he wanted to go in life.

It is the little things that make life magical–the things you can’t buy or trade: such as hearing a steady staccato rain dancing when you are going to sleep, taking the hand of someone you care for when you cross the street, smelling bread baking outside a bakery, or smiling at a baby whose eyes show all the wisdom and joy of the ages. Or perhaps, hearing a song that sings particularly to you. 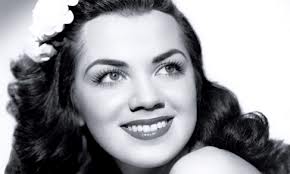 When I was a wee girl, Daddy had a treasured 45-rpm recording of such a song called “Little Things Mean A Lot”. The tune was recorded by a 1950’s-era pop singer my father particularly liked who was called Kitty Kallen. I grew up hearing and singing the song, and fervently believed in the simple way of living it described.

I still know the words by heart–isn’t that a wonderful phrase, and very accurate–and I can sing the song at the drop of a hat. Daddy taught us that the most important things in life, as suggested in the song, cannot be bought or sold.

Today after ten years in this neighborhood, we feel right at home and when the ever-so-occasional street-walker tries to slow my progress–and it doesn’t happen often because I try to be a cautious driver–I try to ignore the interloper since we are family on this street.

And now while Aidan drives Blackie to his job, I drive a new jumper. Although her color is gray, she’s not an old gray mare, as you can see in the following video. Because, yes, my pony still likes to jump!