When I was growing up, Mama used to say so-and-so was up to no good.

Illustrating that description from my childhood was an infamous family whose last name has been lost in the haze of my faulty memory. They were known to be mean, violent, and dangerous as they were in and out of trouble and jail. I don’t remember meeting any of the notorious clan, but their reputations were enough to get my Mamaw’s head to wagging with a tight lower lip. 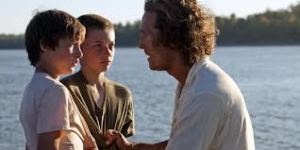 The phrase “up to no good” came to me in reverse as I watched Matthew McConaughey’s new movie “Mud”. It came to me as I watched the movie unfold that its two young boys–just on the cusp of real adolescence–were up to good instead of evil as they tried to help the starving man (McConaughey’s character), who called himself Mud, that they met and befriended on a deserted island near their homes.

Good intentions and trying to do the right thing just because you know it’s right doesn’t always have the expected outcome. As this movie shows, following your internal compass is not easy, but can be messy and dangerous.

Classic American movies celebrate their characters’ rugged individualism, independence, freedom,and  people living by their own lights not necessarily by the laws of the land or what is considered the cultural norm. Immediately coming to mind for me is Henry Fonda giving voice to Tom Joad’s personal mission to be there with the powerless and the hungry in the movie adaptation of John Steinbeck’s classic novel, “The Grapes of Wrath”.

Or similarly, in one of my personal favorites, the 1980 best picture Oscar winner “Ordinary People” where a father and his wounded son forge a life together out of the ashes of a family built on emotional distance, artifice, and pain. 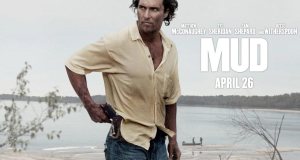 “Mud” is not a perfect movie by any stretch. The movie was nearly caught in the ditch for me when I heard the distractingly false Southern accent of the boy called Neckbone. But the rest of the accents, with many native Southern actors depicting finely delineated characters, eventually won me over.

The film is about broken people (and aren’t we all broken in some way) who reach out to the people they care about offering friendship, acceptance, and love.

Two of the main characters, Mud and Neckbone, have no parents. Mud who is on the run from a murder charge was raised by an eccentric sharpshooter played by the playwright Sam Shepard (who we haven’t seen in a movie in ages), and Neckbone lives with his uncle.

However, it is Ellis, the young boy whose eyes we view the movie, that seems abandoned through most of the story. His parents can hardly see him through the prism of their disillusionment for each other.

For me this movie does the dirty work of arriving at a place of connection, telling the story of people taking risks for people they care about who are in trouble, taking risks to care for others.

Ellis hardly knows the love of Mud’s life, Juniper (played by Nashville native Reese Witherspoon) who seems to be doing Mud wrong with every passing man who buys her a drink. Yet, when asked why he wants to help Mud and Juniper escape together, Ellis said, “Because they love each other.”

In movies, as in real life, sometimes love is not enough to save the people we love. But sometimes it is. And I’d rather pitch my tent in the backyard of love any day, rather than the apathy and oblivion of risking nothing at all.

1 Response to Up to Good