You can say it is a stretch to have a pet spider who comes and goes has he (or she) pleases. But no matter how strange it sounds, we apparently have drawn into our home a tiny, webless, very comfortable with us and him- or herself spider. Apparently unconcerned, for instance, by me trying over and over again to take an in-focus picture of his tiny self.

And no, I am not a spider lover. No matter how helpful they are to take out pesky pests, if one decides to hop in my shower stall, or if he is large, fast moving, or any way invasive, I send him to his great reward via a lovely swim down the drain no matter how steadfastly he fights to stay.

But this spider is not in my shower, he doesn’t move fast, and he is ever so small. So my husband and I have decided to wait him out and see how long he is content to hang around. Our pet spider has no cage, no Guantanamo, just as a free-range chicken, our spider is free to roam and lay eggs, if we have guessed wrongly about his sex. Fifty-fifty either way. We have a good chance of guessing right.

Happy free-range chicken reflects on whether it is possible for a spider to be referred to as a pet just because he ranges about similar to say, a chicken.

Our guest reminds me of the other things I am afraid of: public speaking, hitting anything with my car, hurting someone’s feelings, finding a snake when I’m gardening, or finding I have left my cell phone at home. Those are my top five fears, in order of feardom.

Spiders are not huge on my Richter scale, but large hairy ones might come in maybe tenth or eleventh, just after my fear of being trapped one-on-one–with no escape–having to listen to someone who is an inveterate bore and being inexorably pulled into their vortex of time-wasting horror.

Knoxville, Tennessee, at the beginning of our “fast-moving snowstorm” that my friend Mary and I had determined wasn’t gonna lay. We were wrong.

Nonetheless, this spider-to-human detente has led me to imagine that I might be willing to take a sidelong glance at other dicey situations: such as surviving January, February, March, and April in Knoxville, Tennessee.

Guilty, I am indeed a native who has never learned to deal with the dreary days of East Tennessee’s winters or our just-messing-with-you days of spring’s unpredictable mood swings. 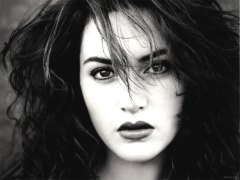 Kate Winslet, who looks curiously just like me, has first dibs on playing me when my as-yet-unwritten memoir becomes a bestseller and is optioned for a movie.

When my ship comes in, after my novel becomes a bestseller or my memoir is chosen to be made into a movie starring Kate Winslet, then perhaps I can escape the four months where Knoxville lives up to the reputation England has so richly earned for dastardly weather. Yes, I read in the New York Times today that the Brits are actually trying to discourage people to emigrate to their island by letting it be known, particularly in certain Eastern European countries, that the British weather is, in a word, appalling. Knoxville winter/spring weather is right up there too, Brits. You are not alone.

Anyhow, I think the moral of the free-range spider story–whether or not you think he or she has risen to the level of our correctly calling him a “pet”–is that you can live with your fears and maybe overcome them if the fears stay in or near the laundry room and don’t join you in the shower.